Orange in Provence Places to visit

Cities and monuments to visit 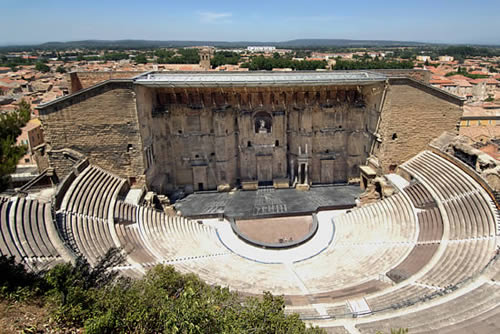 Orange in Provence is located in the Rhone Valley in the beautiful environment of Côtes du Rhône, Provence Like everywhere can count on about 300 days of sunshine a year. Orange has 2 monuments of the Roman era: the Arc de Triomphe and the Ancient Theatre, monuments classified as World Heritage by UNESCO. Orange is located on the Côtes du Rhône territories. The town is surrounded by large wineries such wines Châteauneuf du Pape, Gigondas, Rasteau, Cairanne, Beaumes de Venise, Tavel, Lirac and many others. The museum of art and history of the city preserves the Roman remains from archaeological excavations including a Roman cadastre of the I century AD, the most comprehensive to date. During the reign of Louis XIV, the fashion is printed cottons, say ” Indian ”. imported from distant countries manufacturing these brightly colored fabrics is Forbidden for 50 years and then re-authorized in 1759. It was at this time that JR Wetter in Orange decides to install a factory in the Indian neighborhood Pourtoules, rapidly experience strong reputation beyond French borders. We sell to Italy and Portugal. The size of the factory evolved up to 530 workers, very important figure for that time.

The antique theatert is the best preserved in Europe. its stage wall in perfect condition has made its global reputation. It could accommodate up to 9000 spectators Performances were given it. Today, he resumed his theatrical feature to accommodate many shows.

The first north of the city is marked by a triumphal arch dedicated to the glory of the founders of the city: the veterans of the Second Gallica, then re-dedicated in honor of the Emperor Tiberius. Beyond its honorary function, it defines the separation between the living world and the world of the dead. Indeed, on both sides of the path of Agrippa, which extend necropolis burials, the remains of two tombs discovered in 1995, show the extent and importance.

To do : The Parcours des Princes Nassau and the Roman Route see details on the Orange Tourism office website

Blog information about the Mas de la Chouette in St Rémy de Provence Bouches du Rhone. What happens around the Cottage and the B & B : in the Bouches du Rhone, the Natural Park of the Alpilles, the Provencal Food, the Entertainment, the Events, the Festivals, in Provence etc ..